Covered in the Blood of Christ 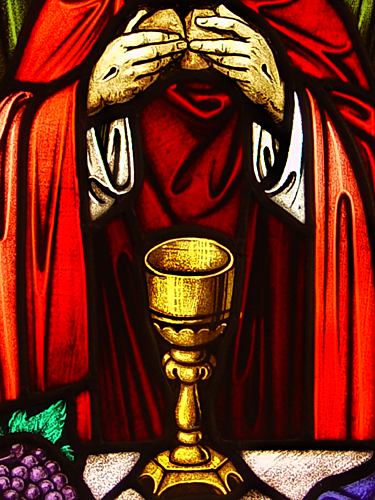 Sundays are one of two things………… they are either filled with yelling, behaviors, and other inappropriate acts or they are filled with one of the above—frankly, i’ll take her spitting versus interrupting Communion or her grabbing young children by the arm and yelling, “te quiero mucho!! te quiero mucho!!”

Totally not embarrassed. Great. Being laughed at by tween churchgoers. Unbelievable…. will I ever escape the being-laughed-at phase… ever?

And while I (and most of the congregation, minus those damn tweens) have come to accept that her behaviors are the result of her disease, it’s tough. I’ve sat in our pew after one of her fits and just cried. Somedays, it’s simply too much to digest in a single sitting……….. the horrors of this grotesque disease.

I play tough on TV. Real life is another story.

Today was another one of those days. Although I managed to remain composed……… this time, I had to ask the question (again……… can’t bring myself to actually do it): Should I stop taking her t0 church?

The bruhaha started not after mom yelled at Padre Andres as he walked down the aisle to the alter as Mass started; nor did it occur as she yelled his name as he walked towards the front of the alter 20 minutes or so later; it didn’t occur when she held up the Communion line for over a minute inviting him to dinner……………. it happened when she grabbed the chalice containing the wine and started to chug it. The woman serving the blessed Koolaid tried to take it back from my mother the lush, and mom, not having her fill, grabbed it back only to spill and splash on herself. Mom then went over to her friend, another woman serving wine, and chugged just a little extra—again grabbing the chalice with enough force that is splashed on her, the floor and a little on me.

I can’t be angry with her….. and while I try to explain that what just transpired is not good, my words go in one ear and out the other. Or worse yet, she laughs at me.

Nice. Mom and the tweens should go shopping at Hot Topic together.

Today I told her that I was sad that she took the wine like that. Unresponsive.

Times like these, I wonder, should I stop taking her? Is it worth it. She interrupts the service and doesn’t really understand what is going on. She remember parts of certain prayers—the ones you can never really forget if you were raised Catholic, Our Father, Hail Mary, etc….but church for her isn’t about the service, it’s about a man. A priest. So I wonder, should she continue to attend an event that causes a tremendous amount of stress and anxiety…. and now a wet, bloody mess………….

What I know………….. she looks forward to Sundays. She can figure out the day of week it is based on certain TV shows. She loves Sundays. It’s a huge deal. She dresses up and even applies a thick, powdery coat of blush all over her face. Yes, I said blush. All over her face. It’s her day. It’s our day. It’s what we do. People know us. They no longer sit in our seat………………..(I like to think it’s out of respect, but mom will yell if you sit in her pew, so people probably just know better by now) but then I think about the stares and the older kids who laugh at us when she acts out—she is that crazy old lady.

I suppose I’ll keep going until someone says something to me. I hold out hope that she will eventually calm down. She’s on new medication to help with the behaviors, and though she’s been on them for over a month now, I keep thinking, “maybe today’s the day….. maybe today she’ll be normal.”